Book Review: The Girls I've Been by Tess Sharpe 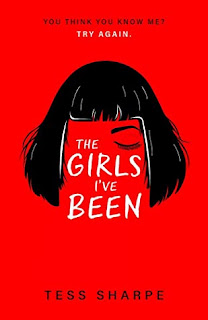 Book Summary:
A deliciously commercial YA page-turner about the daughter of a con artist who is taken hostage in a bank heist.

Nora O'Malley is a lot of things. A sister. An ex. A secret girlfriend. Kind of crooked, but reformed... somewhat.

Nora O'Malley's been a lot of girls. As the daughter of a con-artist who targets criminal men, she grew up her mother's protege. But when mom fell for the mark instead of conning him, Nora pulled the ultimate con: escape.

For five years she's been playing at normal. But she needs to dust off the skills she ditched because she has three problems:

#1: her ex walked in on her with her girlfriend. Even though they've all been inseparable for months, Wes didn't know about her and Iris.

#2: The morning after, they all have to meet to deposit the fundraiser money they raised together. It's a nightmare that goes from awkward to deadly.

Because #3: right after they get in the bank, two guys start robbing it.

But they have no idea who they're really holding hostage.

The robbers are trouble. Nora's something else entirely.
Book Review:
Everyone always raves about Tess Sharpe's debut book, Far From You so when I saw that she had a new book out I thought I would give it a go. In the contention for one of my favourites of the year, The Girls I've Been is a thrilling read with a very compelling main character.After starting it on a whim one night, the writing really spoke to me and I really heard Nora's voice come through. I knew that I was really hooked so I brought a copy straight away.Seeing Nora's story unravel was really interesting and the intersections that broke up the writing left a lot I'd suspense and made me really want to keep reading. I found that the different aspects of the lives that she had were so exciting and I loved how they built who Nora was in the current moment.The characters were also really great and I loved the complex relationship between the three of them. Even though Nora had the most experience in conning a bank robber, they all bought something to the table which made them more complicated and fleshed out.Iris, Wes and Lee all had their own separate arcs and I loved reading about all of them concerning Nora and themselves. Them being well developed meant that I cared about them more deeply in the context of the story.Also, I liked the inclusion of endometriosis and even though I cannot talk about the representation, this will probably help a lot of other people. All the main three characters were also in a bi love triangle which I really enjoyed reading about.The plot as a whole was really gripping and Tess Sharpe did a great job of writing tense into the story until the very end. Even though I was scared about the ending if any one of the characters was going to die. Not to spoil it but I did really love the ending and it was very satisfying.The Girls I've Been is great and I can't wait to read more from Tess Sharpe in the future because I am sure that I will love it all the same.
The Verdict:
The Girls I've Been is a compelling and fast-paced read that will have you on edge until the last page.
Have you read The Girls I've Been? Do you want to? Let me know in the comments!