Book Review: This Train is Being Held by Ismée Williams 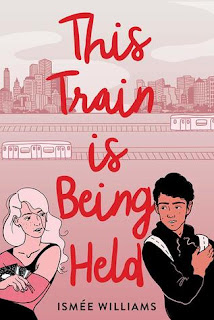 Book Summary:
When private school student Isabelle Warren first meets Dominican-American Alex Rosario on the downtown 1 train, she remembers his green eyes and his gentlemanly behaviour. He remembers her untroubled happiness, something he feels all rich kids must possess. That, and her long dancer legs. Over the course of multiple subway encounters spanning the next three years, Isabelle learns of Alex’s struggle with his father, who is hell-bent on Alex being a contender for the major leagues, despite Alex’s desire to go to college and become a poet. Alex learns about Isabelle’s unstable mother, a woman with prejudice against Latino men. But fate—and the 1 train—throw them together when Isabelle needs Alex most. Heartfelt and evocative, this romantic drama will appeal to readers of Jenny Han and Sarah Dessen.
Book Review:
I was really excited to read This Train is Being Held as let's face it the cover is really pretty. Even though I was drawn in by the cover, I got a story that I liked a lot and it was one of my favourites last year.

To start, I have a slight criticism which is that the book was a little slow and I do feel like it takes a little while to get into. I do still like a slow read though and found the way the book is formatted kept me engaged.

I do like the whole concept of wanting them to meet and the collection of small meet-cutes throughout the story. Seeing two characters slowly fall for each other and come from different backgrounds was interesting to read about and I really enjoyed it.

They both liked each other and seeing them get closer and go through difficulties still be in a relationship was realistic to read about. I also think that the writer tackled some conversations around race and whiteness in comparison to being Latinx that was important and I learnt more from the story.

The plot does pick up at the end and was tense and exciting. I was genuinely afraid for the characters which is a credit to the great writing of the author. Compared to the beginning section of the book this is a big difference. It is this that definitely makes the story better and made me enjoy the characters and the book even more.

Of course, a main part of the book is the romance and Ismée William's goes a great job at developing the romance between the two characters. I loved both Isabelle and Alex and their romance as well as their characters individual. Both were great to read about and I also loved the family relationships in the story.