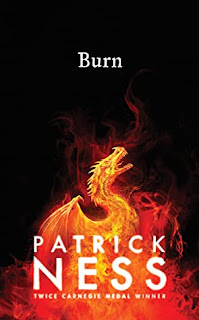 Book Summary:
On a cold Sunday evening in early 1957, Sarah Dewhurst waited with her father in the parking lot of the Chevron Gas Station for the dragon he’d hired to help on the farm.

This dragon, Kazimir, has more to him than meets the eye. Sarah can’t help but be curious about him, an animal who supposedly doesn’t have a soul but is seemingly intent on keeping her safe from the brutal attentions of Deputy Sheriff Emmett Kelby.

Kazimir knows something she doesn’t. He has arrived at the farm because of a prophecy. A prophecy that involves a deadly assassin, a cult of dragon worshippers, two FBI agents – and somehow, Sarah Dewhurst herself.
Book Review:

I have been a massive fan of Patrick Ness for years, since the release of The Rest Of Us Just Live Here so whenever he puts out a new book, I have my preorder ready. One of my favourite things about Patrick Ness is that he is not afraid to write stories that you don't quite expect and that is Burn. Burn is a story that kept me guessing until the end which features lovable characters to keep you reading.

It is fair to say that Burn was nothing like I was expecting but that is not a bad thing. In fact, it is all but a good thing.
Like most people I knew the basics, the fact that it was set in the 1950s and that there were dragons, but Burn is so much more than that. Once you get past the first act, the whole world shifts and I was not imagining that it would go that way.
I will say that it does quite weird but for me, this is a good thing. I love how Patrick Ness takes an idea that has been done in YA and flips it on its head. All this kept me really invested in the story and I finished it really quickly in about one or days. This is a credit to Patrick Ness's writing of course!
With this, I did like the setting, as I have always wanted to read about books in the 1950s and I think that the time period is utilised well. At a time in the Cold War era, ideas such as race and sexuality are discussed. They are key ideas with the main protagonist, Sarah being BIPOC and one of the side characters being gay. I also liked how dragons were placed in the plot as there is a way that you expect dragons to be in the story but this was shifted around.

I really connected to the characters and they were the main draw point of the story. We see them all go on journeys and change just as the story does. Although I really liked Sarah as a character, I really loved Malcolm and seeing his progression throughout the story made my heart melt.
I want to recommend the audiobook as the narrator, Joniece Abbott-Pratt because I loved listening to her bring the story to life.
Like a lot of Patrick Ness stories, I always think about revisiting them so I will have to revisit this weird story soon.

The Verdict:
Patrick Ness has created a wholly imaginative and exciting world in Burn where you consistently guess what happens is going to happen next.
Have you read Burn? Do you want to? Let me know in the comments.