* I am reviewing this book which I was gifted for free from the publisher in exchange for an honest review for part of a blog tour. All thoughts are my own. * 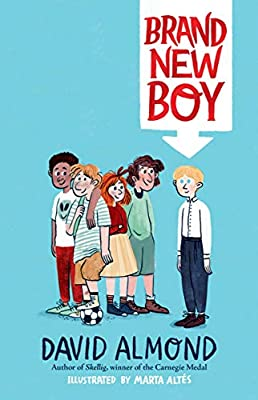 Book Summary:
A warm and thought-provoking tale from a master storyteller, winner of the prestigious Hans Christian Andersen Award and author of the Carnegie Medal-winning Skellig.“Mam, did you think George was,” I say, “a bit … weird?”“Weird? Yes, I suppose so. But you kids are all a bit weird if you ask me. And to tell the truth, it’d be weird if you weren’t.”When a new boy joins the class, everyone thinks he’s a bit strange, but he’s brilliant at football and loves crisps, and that’s all that matters to Dan and Maxie. However, the truth about George is stranger than anyone could have imagined ... and more sinister, too. Can his new pals help him to become truly free?
Book Review:
Even though I am not normally a massive fan of middle grade, I have read and enjoyed some of David Almond's books in the past, so I wanted to give this one a go. I was pleased that I read this one because it captures what it is like to be a child and grow up.

So first I am going to get the negatives out the way. I think that at the start that the main characters seem to think a lot older than they were. This also seemed to match the ending, which I felt was kind of rushed, and it felt slightly strange and again, something that children would not do. I don't know, maybe it is just me.

I really did like George as a character, and I think that David Almond did a great job of building up tension in the book over his character. I liked seeing the hints towards George, and I like how I was guessing what George was until it was finally revealed. I also don't blame the kids that didn't want to find out as I would definitely be the same at 12.

Due to all of this, it did give me E.T vibes because the relationships between the characters were heightened, and David Almond does do a great job of making this really important. Especially after a major plot point happened, I felt like the characters really came together and were united for George. It was lovely about how friendship was at the core of the book.

The illustrations were also a highlight of the book, and they added to the story. I did love them, and I think that Maria and the parts of the story that she picked some features of story that were great to see in the book.

As a lot of books are set in the South, so the Northern setting was a nice change. Also, this went into the dialogue as well, so it added to to the Northern feel of the story.

Brand New Boy is a great new book by David Almond that explores the heights of friendship.
Have you read Brand New Boy? If so, what did you think about it? Let me know in the comments.