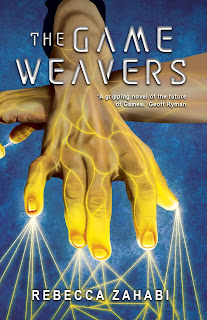 Book Summary:
'He spreads out his hands. They glow yellow, then orange. Threads emerge from underneath his nails, shining out of the skin. They weave themselves together, the fingers knitting their light-made lace until the threads form a fabric heading out of the glass panes and towards the fields. They cross the glass without so much as a shudder. Seo crafts his land.'
Seo Kuroaku has it all. Adopted as a boy by the formidable Sir Neil, he's the youth champion of Twine, the high-pressured national sport. Played in arenas where thousands come to watch, weavers craft creatures from their fingertips to wage battle against fearsome opponents. But this is a Britain of much darker times - and Seo is harbouring a secret.
When he is outed, Twine can't help him. With the help of his little brother Minjun and Jack, the man he can't decide if he loves or not, Seo has to find a way to get his life back on track, whilst facing the biggest match of his life.
In The Game Weavers, Rebecca Zahabi has created a fantastical yet hauntingly contemporary narrative which is both a love story and fable - The Game Weavers is a coming of age story about the importance of intimacy, family and self-acceptance.
Book Review:
When I was asked to review The Game Weaver, I was quite excited as it wasn't a book that was on my radar but sounded really interesting. I was so excited that I did, however, as The Game Weavers was a new and fresh story that teaches its readers and characters to love themselves.I have to admit that I wasn't completely in love with the book when I first started to read it as I wasn't a fan of some of the language used. This did change as the book evolves and you realise the reasons for this language being used as Seo has a lot of self-loathing over his sexuality which is explored throughout the course of the book.This was something that I really like in the book was seeing Seo finally connect and accept his sexuality. While I think that the ending was a bit predictable, for younger readers this could be the right book they read and can make a massive impact.Of course, the coming terms with sexuality is just a small part of this book. Rebecca Zahabi creates such a rich and unique world that is very different and new. I definitely liked the elements of Twine and I also think that the way the scenes were written brings it to life. They were really interesting and I think that having a fictional sport really was a great new concept.This creates a great dynamic with the character of Penelope which ends in a really exciting and nerve-wracking ending. I also think that the character dynamics were a strong point of the book especially with Sir Neil who was a highly disliked character but I think with this, Seo discovers that he could be who he is.My favourite interactions were with Minjun and I loved the brother interactions as I really do like seeing family relationships developed in YA. While I didn't love Minjun chapters as I didn't like the style of writing, it was because Zahabi does write him as childlike which is accurate as he is a child. Basically, it's my thing and I am nitpicking.I also loved Jack as he offered another perspective on the society in the book and is really the turning point in their book to get Seo ready to accept himself. He is sometimes hard on him but I really liked seeing their relationship develop and yeah it was really great. While I thought that Seo was a little bit cold and distant, I really did like his development as a solid main character.Basically, while I did have some problems with The Game Weavers, it does not take away from the fact this book is a unique YA read that more people should get their hands on.

The Verdict:
Captivating and raw, Zahabi takes us to a world that is equal parts magical and heartwrenching, with characters who fight for what they truly believe in.