* I am reviewing this series which I was gifted for free from the author in exchange for an honest review. All thoughts are my own. * 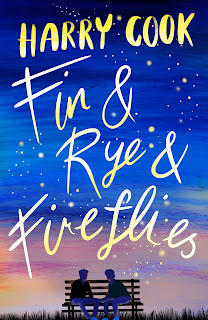 Book Summary:
“It started with a kiss…as love stories often do. Jesse Andrews had the arms of a Greek god and he was on the track team. The night of our kiss fell on a Friday.”Then, only a few days later, Fin’s world is turned upside down - and not in a good head-over-heels-in-love way - when Jesse cruelly outs him. An event that ultimately leads to his family leaving town.But a fresh start isn’t going to change the truth of who Fin is. And it’s not going to stop his sexuality causing everyone all sorts of problems. Everyone, that is, apart from his new best friend Poppy, her girlfriend-in-waiting June, and his new crush Rye… So, while Fin and Rye are enjoying some seriously intimate moonlit moments together, Fin’s parents decide to pack him off to the local ReSouled ‘therapy camp’.It’s a nightmare - and there’s no easy way out. Can Fin’s squad hatch a plan outrageous enough to spring him before the ‘conversion’ acolytes force him into the straight and narrow?
Book Review:
When I saw the growing buzz around Fin & Rye & Fireflies after it was announced, I knew it was a book that I should keep on my radar so when the opportunity to be part of the blog tour came I jumped at the chance to read and review it. Fin & Rye & Fireflies is a great read and should be talked about a lot more.
One of the major things for me in this book that I loved was that the friend group in this was diverse and everyone was part of the LGBTQIA+ community. I always say that it is strange in books when you just have one gay character but this was not the case with Fin & Rye, as we have a trans and pan character and a bi character as well as two gay characters. Even though I can't personally speak for representation, I did find this was a nice part of the book.
I also liked that the book was set in Australia. I know that Harry Cook grew up in Australia and it did offer a new perspective to the typical YA that I read is based in the UK and the US.

I, of course, like the relationship between Fin & Rye. It was a slow burn kind of deal as Rye has a boyfriend for the start of the book but I think that even though that Fin did like him, he did not act until he was not in a relationship. I also liked the different perspectives as we definitely got to see them shine as characters and read as their feelings changed.
The characters are both not flawed as Rye has anxiety and mental health issues which I felt were dealt with well and Fin has issues with his Dad who does not respect his sexuality.
Although I liked so much of the story, I did in some parts feel disconnected from the writing in other places. I don't know why but in some places it did seem to fit and I was taken up as the story was washing over me and I enjoyed it.
I can definitely understand that this book should find its ideal audience, which is gay bloggers and teenagers. Even though I did have a good time reading this, I would like to just hand it to them as I feel like they would take something more than I could.
Fin & Rye & Fireflies is definitely going to find its audience and when it does I'm sure that it will hit people differently and that it will mean more than it ever can to me.

The Verdict:
Fin & Rye & Fireflies is a book that juggles hard topics and a light-hearted feel to encapsulate the perfect story for those who need it.
Have you read Fin & Rye & Fireflies? If so, did you like it? If not, do you want to? Let me know in the comments below! 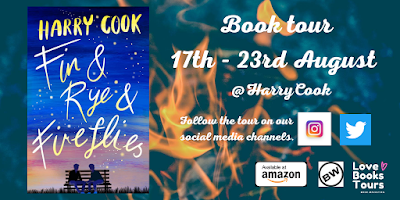