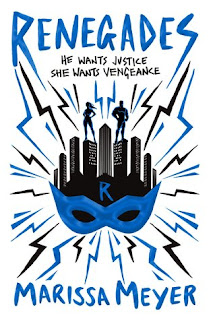 The Renegades are a syndicate of prodigies―humans with extraordinary abilities―who emerged from the ruins of a crumbled society and established peace and order where chaos reigned. As champions of justice, they remain a symbol of hope and courage to everyone . . . except the villains they once overthrew.

Nova has a reason to hate Renegades, and she is on a mission for vengeance. As she gets closer to her target, she meets Adrian, a Renegade boy who believes in justice―and in Nova. But Nova’s allegiance is to a villain who has the power to end them both.

New from Marissa Meyer, author of the #1 New York Times–bestselling Heartless, comes to a high-stakes world of adventure, passion, danger, and betrayal.
Book Review:
I have loved many of Marissa Meyer's books during my reading experience, especially The Lunar Chronicles. When I saw that this was coming out, I was really excited for someone who really enjoys comic books films and superheroes. So when I finally read this, I was surprised as I did enjoy it, but I did have some problems with it.
I should probably say that I tried so many times to read this, but I just couldn't get into it. I feel like it was just prolonged even though I did really connect with the prologue. I just couldn't get past the prologue so many times, and I just gave up. I finally told myself that I wanted to finish it because of the good reviews, and I was still interested.
Even though I did have some problems with the pacing and the beginning, I was sold once the book got going. I did like the setting, and I think it was well developed and I hope that this is something that we can see more in the sequel books. It does get to the point where some comic book TV series and films have got to where they are critiquing the world they live in.
Marissa Meyer went did go there with the whole black and white comic book ideas. She plays with nuances so well as Nova is trying to navigate this world and doing what she believes is right, which is a common thread throughout the book with all of the characters. This was something that I really connected to and really enjoyed seeing throughout the book.
I also loved most of the characters, including Nova and Adrian, both the characters themselves and their relationship. I like Adrian and his background in the story, which does have, which does contain some spoilers. I also enjoyed the different types of powers they had as it was more unique than what you normally see. I did like the world and would like to see where the story progresses.
So even though I had so many problems getting into the book, I do want to continue with the series, whenever that may be.

The Verdict:
Renegades is a book designed for anyone who loves anything comic related and like their stories complex and not black and white.
Have you read Renegades? If so, did you like it? Do you want to? Let me know in the comments.