June 18, 2019
*I am reviewing this book which I was gifted for free by Firefly Press in exchange for an honest review. All thoughts are my own. * 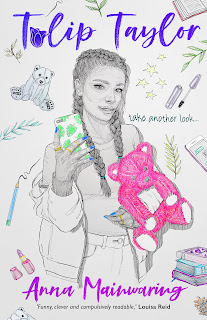 Challenged to go on a `survival' reality TV show, fifteen-year-old make-up vlogger Tulip only accepts to escape her mother's money-making schemes and protect her younger brother and sister. Set up to fail, can she prove to the TV show, to Harvey - the cute but annoying boy who got her on there - and most importantly to herself, that she's more than just a pretty face? As Tulip puts down her phone and heads for the hills, she finds she has both the courage and insight to take on each new challenge. But as 'reality' gets ever more crazy, will either teen escape their families and their time in the spotlight unscathed?

Book Review:
Tulip Taylor was a book that I hadn't really heard of before I was taking part in the blog tour and I was worried that I wouldn't like it. I was surprised to say that I enjoyed Tulip Taylor which is a story perfect for anyone of any age.

I also didn't know what the book was about at the start, only having a minor idea so it was nice to the story develop how it did. The book definitely allowed Tulip to have some great character development which I enjoyed. She also develops in a way that allows her to change how she feels about herself which I think is needed for the world that we live in today.

I also liked Tulip as a character as there is a way that she could have been a stereotype of a beauty vlogger but this was not the case. Anna Mairwaring uses words to start the book including the fact that Tulip has enjoys grammar and vocabulary. I thought this was a nice touch and even I learned some of the words myself.

I also liked many of the minor characters in the book. I thought that her mum was a really interesting character and that She was quite flawed. I liked this because when we tend to see parents in books they are often seen as dead or characters that have their children's interests at heart. This was definitely not the case for Tulip.

I also think that the book develops Harry as a love interest as well making his complications and struggles a key theme of the book which he develops. I also loved reading his relationship with Tulip develop over the book.

The survivalistic part of book, which happens at the end, was also really great. I liked seeing the preparations for it and I do think that a lot of the aftermath may have happened. The scenes where they are in the wilderness of Scotland was also interest and enjoyable to read. I don't think that I could do any of the challenges anytime soon.

Although I enjoyed the book, I did find that one part of it did not sit well with me. I often have a problem with the idea that people criticise the overuse of technology by teenagers and young people which is featured in the book. While I understand why it was included, to further character development, it did dampen my enjoyment of the book but not to a massive extent.

Tulip Taylor is a unique and interesting contemporary story, perfect for the summer, asking us to take a look from our screens once in a while as we might be surprised as to what we find. 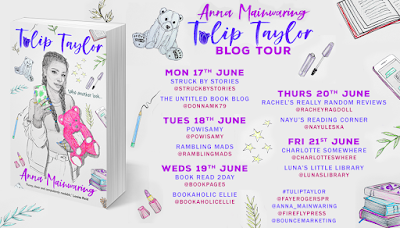 Have you read Tulip Taylor? Do you want to? Let me know in the comments below.