May 07, 2019
*I am reviewing this book which I was gifted for free by Ink Road/ Black and White Publishing in exchange for an honest review. All thoughts are my own. * 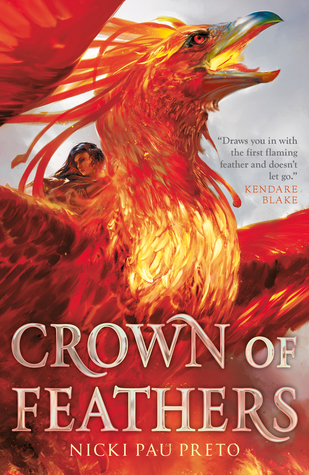 In a world ruled by fierce warrior queens, a grand empire was built upon the backs of Phoenix Riders legendary heroes who soared through the sky on wings of fire until a war between two sisters ripped it all apart.Sixteen years later, Veronyka is a war orphan who dreams of becoming a Phoenix Rider from the stories of old. After a shocking betrayal from her controlling sister, Veronyka strikes out alone to find the Riders even if that means disguising herself as a boy to join their ranks.Just as Veronyka finally feels like she belongs, her sister turns up and reveals a tangled web of lies between them that will change everything. And, meanwhile, the new empire has learned of the Riders' return and intends to destroy them once and for all.Crown of Feathers is an epic fantasy about love's incredible power to save or to destroy. Throughout is interspersed the story of Avalkyra Ashfire, the last Rider Queen, who would rather see her empire burn than fall into her sister's hands.

Book Review:
When I heard about Crown of Feathers, you could say that I was excited especially as it is about phoenixes which is such a unique idea and something that I haven't read about before. So it shouldn't be a surprise to say that I loved Crown of Feathers. It shocked me. I devoured it. I loved it.

So one of the obvious part about why I loved the book so much was the mythology surrounding phoenixes. I especially like this in the first part of the book as it was a way to get to know the characters but introduce the readers to the world.

I also really like the characters in the book, except an obvious one. I do, however, think they whole point was for the reader to dislike her so I understand why this was done as her actions were not great. Also there is a massive twist with this character and I really wish that I had figured it out.

I also really liked Veronyka as a character as she was developed and the journey that she goes through is really great and she changed over the course. Veronyka also goes through a trope that I'm never really sure that I like but it this it did pay off and gave some really interesting narratives.

I also really liked the male characters in the book especially Sev but Tristan too and I also feel that both had good character arcs that were great to read about. Even though I enjoyed her character, I do wish that we got more from Sev as he had an interesting narrative and I loved him. Also, I loved Tristan's relationship with his Dad and how this changed throughout.

As well as the characters I Ioved the plot especially the second half of the novel as this was the most tense and where the major actions happens. It is safe to say that I raced through most of this book and it was a welcomed break from my revision.

Crown Of Feathers was a unique take of YA Fantasy having characters you will root for and plot twists that will shock you. Plus it has phoenixes so what's not to love. 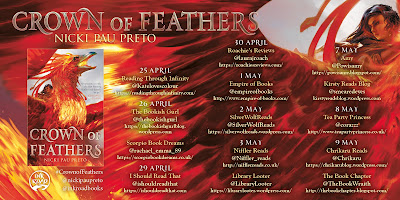