Three Hallows February Post: My Favourite Quotes From I Believe In A Thing Called Love by Maurene Goo

February 27, 2019
This month, the book club, Three Hallows that I have been taking part in with Alex and Rachel have been reading I Believe In A Thing Called Love by Maurene Goo. All of us enjoyed the book although I did have some problems with it, it was an entertaining read. In this one, I would like to share my favourite quotes from the book. So let's get started...


“Real love: It was all about risk and having faith. There were no guarantees.”

“That's sexist crap. When a guy goes through obstacles to get a girl, it's considered 'romantic.' Think climbing through a girl's window unannounced to watch her sleep. However, when it's a girl making dramatic gestures for a guy, it's creepy. Double-standard bullshit!”

“You cannot control who you love, Desi, but you can always control how hard you fight, okay?”


“Everyone’s weird, though. If you’re not even a little weird, you are truly weird. In that bad way. Not in the good way.”

“I believed, and still believe, that you can build your dreams brick by brick. That you can accomplish anything with persistence.” 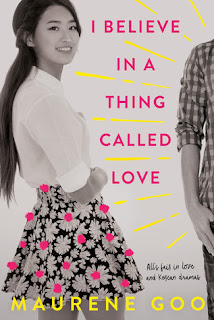 Here is a summary of the book...

Desi Lee believes anything is possible if you have a plan. That’s how she became student body president. Varsity soccer star. And it’s how she’ll get into Stanford. But—she’s never had a boyfriend. In fact, she’s a disaster in romance, a clumsy, stammering humiliation magnet whose botched attempts at flirting have become legendary with her friends. So when the hottest human specimen to have ever lived walks into her life one day, Desi decides to tackle her flirting failures with the same zest she’s applied to everything else in her life. She finds guidance in the Korean dramas her father has been obsessively watching for years—where the hapless heroine always seems to end up in the arms of her true love by episode ten. It’s a simple formula, and Desi is a quick study. Armed with her “K Drama Steps to True Love,” Desi goes after the moody, elusive artist Luca Drakos—and boat rescues, love triangles, and staged car crashes ensue. But when the fun and games turn to true feels, Desi finds out that real love is about way more than just drama.


Check out the other members of The Three Hallows here:
Rachel

Have you read I Believe In A Thing Called Love? Let me know in the comments below.