Book Review: Things A Bright Girl Can Do by Sally Nicholls

September 26, 2017
*I have received this book in exchange for an honest review from the publisher. All thoughts are my own * 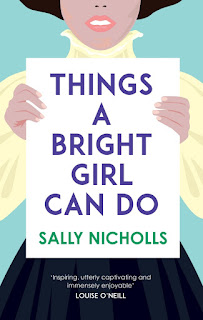 
Summary of the book from Goodreads:

Through rallies and marches, in polite drawing rooms and freezing prison cells and the poverty-stricken slums of the East End, three courageous young women join the fight for the vote.Evelyn is seventeen, and though she is rich and clever, she may never be allowed to follow her older brother to university. Enraged that she is expected to marry her childhood sweetheart rather than be educated, she joins the Suffragettes, and vows to pay the ultimate price for women's freedom.May is fifteen, and already sworn to the cause, though she and her fellow Suffragists refuse violence. When she meets Nell, a girl who's grown up in hardship, she sees a kindred spirit. Together and in love, the two girls start to dream of a world where all kinds of women have their place.But the fight for freedom will challenge Evelyn, May and Nell more than they ever could believe. As war looms, just how much are they willing to sacrifice?

Being a History Student a book like Things A Bright Girl Can Do is clearly something that I would like to read, I mean a YA book about the Suffragettes movement, sign me up. Due to these high expectations, I was quite almost scared to read the book in case it did not reach them, however, I loved Things A Bright Girl Can Do and it quickly became one of my favourite books of the year.

Things A Bright Girl Can Do follows three girl's narratives over the First World War and their involvement with the Suffragettes movement and their varying situations. This was an aspect that I really enjoyed in the book as it showed the various different involvement in the movement due to their situation. Nicholls, therefore, does each narrative justice as all characters plots are interesting and kept me engaged.

Although I did like all three girl's narrative, Evelyn's did stand out for me as I really liked her relationship with Kit especially as he was quite supportive of her during the movement. Her plot also captures the trials of the movement especially force feeding that was quite difficult to read at times.

I, of course, really liked the relationship between May and Nell and it was really nice to see and develop a female-female relationship especially in the context of the period. I also liked the fact that the girls came from different backgrounds and experiences making it an interesting read.

I guess this book did capture my heart in a historic way which is no surprise really as British and Women's History are some of my favourite types that I love to learn about and I just love how it was done and raced through it. It just captured my heart.

Things A Bright Can Do is a really great story following the Suffragette movement through the eyes of three different girls and captures the need of believing in something and doing whatever it takes to achieve it.

Have you read Things A Bright Girl Can Do? Did you like it?