July 01, 2015
It’s Wednesday so that means that it’s Top 5 Wednesday and this week’s topic is favourite chapter headings. To find more about the Top 5 Wednesday’s you can join the Goodreads group and discover the creator of the group Lainey. So let’s get started…

In Delirium the chapter headers are accompanied by quotes that relate to the story, giving examples of why the society is like it is allowing the reader to give context to the dystopian future. It also has great typography and the addition of birds is a nice touch.

Number 4-All the Bright Places by Jennifer Niven

In All the Bright Places, the chapter headings are used as a way of see the development of the characters over the course of the novel especially the way it is used for Violet, and are quite effective in this hence the number 4 spot.

In the Iron Fey series and The Iron King, the chapter headings are used to give an insight to the chapter’s contents without being too explicit in what is happening. It also contain a gorgeous detail that matches the cover.

In the Book Thief, the chapter headings are used to see what is included in the next chapter and has beautiful typography that make it quite interesting and adds to what is a really great book. 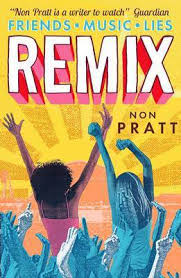 Remix is set at a fictional festival so it is used to good effect, the fact that the chapter headings are song titles for example The Fall out Boy song thnks fr th mmrs. Although I have not read the book I feel that the songs would add to the theme of the book quite well.

-     Fangirl by Rainbow Rowell- Cath the main character is a fanfiction writer and both the book she writes fan fiction about and her own fan fiction is used effectively in this book.

-    Me and Earl and the Dying Girl by Jesse Andrews- The chapter headings are equally as funny as the book itself and reflect Greg’s personality also the design is also very nice.

-     Unwind by Neal Shusterman- The book uses extracts from today’s society and the dystopian society within relating it to the book's content. Both Unwind and Delirium do this effectively in their headings.

-     City of Heavenly Fire and the rest of the TMI series by Cassandra Clare- Cassandra Clare used chapter headings as a way of a vague description of the chapter but does them in her own uniquely.

What are your favourite chapter headings? Leave them in the comments below.