* I am reviewing this book which I was gifted for free from the author in exchange for an honest review. All thoughts are my own. * 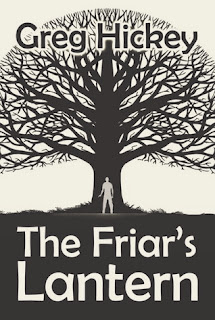 Book Summary:
You may win $1,000,000. You will judge a man of murder.An eccentric scientist tells you he can read your mind and offers to prove it in a high-stakes wager. A respected college professor exacts impassioned, heat-of-the-moment revenge on his wife’s killer—a week after her death—and you’re on the jury. Take a Turing test with a twist, discover how your future choices might influence the past, and try your luck at Three Card Monte. And while you weigh chance, superstition, destiny, intuition and logic in making your decisions, ask yourself: are you responsible for your actions at all? Choose wisely—if you can.
Book Review:

When I got a request for The Friar's Lantern, I was interested in picking it up as I had only seen choose your own adventure films but not books. I had also wanted to read more science fiction so it seemed like a win-win. I did really enjoy The Frair's Lantern and would recommend it to anyone who wanted to read more of these types of stories.I think one of the main problems that I had with the book is the way that fat people and people of colour were described. A lot of the descriptions for fat people did seem to me to be a little offensive and linked to stereotypes. Whereas the people of colour were described as links to food and coffee which seeing reviews from BIPOC, there are other ways this could have been phrased.I did read the book as one unit rather than following the chose your own adventure element but this was so that I could read all of it rather than only one route. It was obvious that there were different decisions based on what you choose. Obviously. But I did really like the fact that subtle changes were made and they did make a difference.Also although some of the ideas were quite big and often went over my head, I did like the conversation around choices and what can happen if you made the wrong one. This happened with the murder and the money that you has the main protagonist can win. I think this was well done and that Greg Hickey did a good job of this. While I did not find the trial scenes to be the most interesting and was sometimes confused, it did not make the reading experience too hindering.I also enjoyed reading in the second person as it really does get the conversation of the ideas at the heart of the story. I also do think that your own point of views do come to play but I think that it is understandable.

The Verdict:
The Friar's Lantern is an interesting and intriguing read that takes the choose your own adventure story to an adult audience expertly.
Do you want to read The Friar's Lantern? Have you read it? Let me know in the comments.