October 20, 2019
*I am reviewing this book which I was gifted for free by Hot Key Books and Darkroom Tours in exchange for an honest review. All thoughts are my own. * 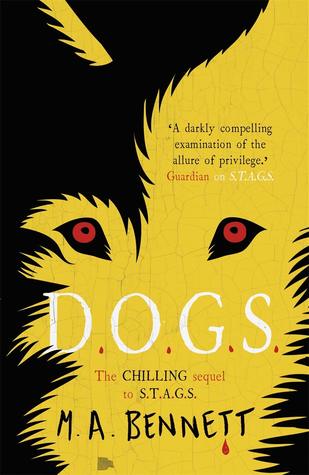 After the dramatic events of the last few weeks, Greer Macdonald is trying to concentrate on her A levels. Stuck for a play to direct for her drama exam, she gets help from an unexpected quarter . . .A priceless lost play, buried by time, is pushed under her door. It is Ben Jonson's The Isle of Dogs, a play considered so dangerous in Elizabethan times that every copy was burned . . . except one. As the students begin to rehearse it, events become increasingly dark and strange, and they lead Greer back to where she never thought she would return - Longcross Hall.There she discovers that not only is the Order of the Stag alive and well, but that a ghost from the past might be too . . .

After the cliffhanger of S.T.A.G.S., I have been eagerly awaiting the release of D.O.G.S. as I wanted to know what happened and was happy that the wait was very much worth it! Overall D.O.G.S. was a great sequel to S.T.A.G.S and I have even more waiting for the next book.I was excited to read the book because the idea of the play interested me. I was excited to see how the plot around it unravelled and the direction it went. I was even surprised that the Isle Of Dogs was a real play which leads to some googling. I think that the play was well placed in the story and it is surprising that it even had happened in the first place.I also think that M. A. Bennett's writing is easy to read which is a great thing and lent itself to such a fast-paced plot which I wanted to race through. The book also has lots of pop culture references in it which I also really enjoyed and added to the story which helped contextualise it.I also really enjoyed the characters in the book especially Greer as she was a great character to connect with and to follow her story. All the characters that we introduced in the book were also really fleshed out and added to the plot itself.I also love the story of STAGS and want to see how far it goes because of that ending. 😱 I think that I just want to keep reading the story to see what creative stories M. A. Bennett comes up with next because I will be there waiting.Also, I read this book partly physically and in audiobook form and I loved Lucy Dixon who read the audiobook. Her changes in accents are great and they make the writing so easy to fly through. This is, of course, another great part of writing which I loved.The Verdict:D.O.G.S. is a great book and sequel to S.T.A.G.S that will leave you telling and wanting to read the next one. It's a YA thriller at it's best.


Have you read D.O.G.S? Do you want to? Let me know in the comments below!