Book Review: The Truth About Keeping Secrets by Savannah Brown 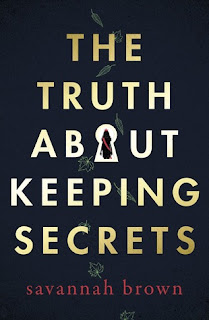 Book Summary:
Sydney's dad is the only psychiatrist for miles around their small Ohio town.He is also unexpectedly dead.Is Sydney crazy, or is it kind of weird that her dad-a a guy whose entire job revolved around other peoples' secrets-crashed alone, with no explanation?And why is June Copeland, homecoming queen and the town's golden child, at his funeral?As the two girls grow closer in the wake of the accident, it's clear that not everyone is happy about their new friendship.But what is picture perfect June still hiding? And does Sydney even want to know?THE TRUTH ABOUT KEEPING SECRETS is a page-turning, voice led, high school thriller.
Book Review:
I have loved Savannah Brown's poetry and YouTube channel for the last few years so when she was releasing a book, I knew I had to read it. The Truth About Keeping Secrets is an interesting and thoughtful read and I can't wait to see what she writes next.
Although I am not really a thriller type of person, I knew that I still wanted to give this ago. This also didn't hinder my enjoyment because I actually really enjoyed it and as someone who normally guesses the mystery, I didn't in this one.
One of the main reasons why I enjoyed this so much was because Savannah Brown knows how to write a novel. There was something so special about the way that the forms characters and builds the whole mystery. The characters were also really compelling and interesting to read about.
The way that Sydney was written was raw and realistic. I think that the way that grief and mental health was so great and realistic. This was definitely a strength of the book although and was a major draw for each one.
I was obviously interested in the mystery and I don't think that I guessed what happened but I did read it a while ago. Also, I must mention the queer elements which I did enjoy and added to the book.
The Verdict:
The Truth About Keeping Secrets is a thrilling read that deals with mental health with excellence.
Have you read The Truth About Keeping Secrets? If so, what did you think? Do you want to? Let me know in the comments.