Book Review: Jack Of Hearts (and Other Parts) by L.C. Rosen 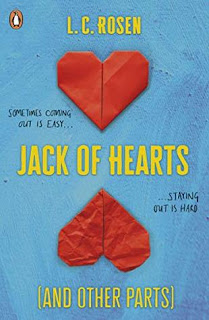 Book Summary:
Jack Rothman is seventeen and loves partying, makeup and boys - sometimes all at the same time. His sex life makes him the hot topic for the high school gossip machine, but who cares? Like Jack always says, 'it could be worse.'And then it is. After Jack starts writing an online sex advice column, the mysterious love letters he's been receiving take a turn for the creepy. Jack's secret admirer loves him, but not his unashamedly queer lifestyle. And if Jack won't curb his sexuality voluntarily, they'll force him.As the pressure mounts, Jack must unmask his stalker before their obsession becomes genuinely dangerous...
Book Review:
I had heard so much about Jack of Hearts (and Other Parts) when it first came out and I was interested in the premise. The book is quite special in the way that it deals with sex positivity and for that alone it is worth the read.Although I think the book is really important, I have to say that I had some problems. I found Jack as a character really annoying and this made it hard to connect to a lot of the book. He does have a vulnerable side which you can definitely see but some of the actions are quite questionable.A lot of the book does focus on a place where teenagers can get sex advice given by Jack. A lot of this is really great to read about as books do shy away from the topic but of course, so many people can benefit from the descriptions.As an asexual person, it was nice to see representation included in the story and will definitely help readers and those who need it. I also think that the description was based around sex and different types which again make the appeal wider.I did for the most part enjoy the characters and Jack's friends and how they all supported him. I really do hate the whole blackmail trope though and even though it was handled well, I just don't want it included in my stories. Especially LGBTQ+ ones.I did like the writing style and the issues they were tackled which made me want to read more from L.C. Rosen in the future. I have also heard a lot of good things about Camp so will definitely get to it soon!The Verdict:Jack of Hearts (and Other Parts) is a special YA read that a lot of people should read.
Have you read Jack Of Hearts (and Other Parts)? If so, what did you think? Do you want to? Let me know in the comments.