Book Review: The Boy I Am by K.L. Kettle 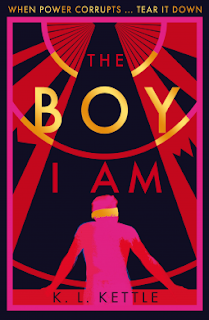 Book Summary:
They say we’re dangerous. But we’re not that different.Jude is running out of time. Once a year, lucky young men in the House of Boys are auctioned to the female elite. But if Jude fails to be selected before he turns seventeen, a future deep underground in the mines awaits.Yet ever since the death of his best friend at the hands of the all-powerful Chancellor, Jude has been desperate to escape the path set out for him. Finding himself entangled in a plot to assassinate the Chancellor, he finally has a chance to avenge his friend and win his freedom. But at what price?A speculative YA thriller, tackling themes of traditional gender roles and power dynamics, for fans of Malorie Blackman, Louise O’Neill and THE POWER.
Book Review:
After hearing about The Boy I Am, I was super excited, partly because I think the cover is one of the best ones of the year, but also as the concept really caught my attention. After consistently looking it on my bookshelves for a couple of weeks, I finally caved in a read the book. The Boy I Am is YA at its best and more people should definitely have this on their radar.
When I first started reading the book, it is safe to say that I was hooked. K.L. Kettle has built such a complex world that I was immersed in it. From the first page, the book sets up the thrilling elements and does not let the reader go. I think the elements of the world are so unique and creative and I have never read something like this before.
This is a credit to the writing because we are first met with Jude who I rooted for immediately. This is a common thread in the book as I wanted to protect him throughout as he offered a unique worldview and was the reader's guide to the world. Even though he does change in some ways throughout the novel, I feel like he remains a strong character and keeps his beliefs.
I also enjoyed the other characters in the novel, especially the Chancellor and Vik. All of the characters had so much depth and were complex, that I was able to root for them and despise all of their actions. I think having Jude as the main character offers a different side in the way that reactions and relationships form between them as we see the true reality of the world.
The book is obviously key in the themes that it discusses. The main thing that I gained from The Boy I Am is about power and the idea that power can corrupt whoever has it. It also discusses the stereotypes that come from women and men which I think that it accomplished. It made me think a lot and I love it when a fiction book does this.
I have to admit that I was in a bad mental health place when I read the end of the book and I know this had an impact on my reading experience. This is obviously sucky as I definitely did not connect to the end in the same way as the beginning.
Saying this, I did like where the ending went and thought that Jude is well-developed and I think that it still was a great way to end the story as a whole. The ending was also great at portraying the ideas that were woven throughout.
Basically, The Boy I Am is a very good YA book and I am excited to see what K.L. Kettle writes next.

The Verdict:
The Boy I Am is a thrilling and important read dealing with power and femininity where everything may not be as it seems.
Have you read The Boy I Am? If so, what did you think? Do you want to? Let me know in the comments.