Book Review: Keeper Of The Dawn by Dianna Gunn 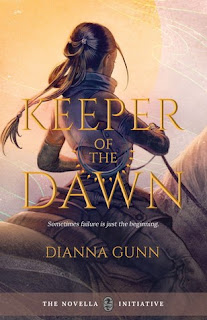 Book Summary:
All Lai has ever wanted is to become a priestess, like her mother and grandmother before her, in service to their beloved goddess. That’s before the unthinkable happens, and Lai fails the trials she has trained for her entire life. She makes the only choice she believes she can: she runs away.

From her isolated desert homeland, Lai rides north to the colder, stranger kingdom of Alanum—a land where magic, and female warriors, are not commonplace.

Here, she hears tales about a mountain city of women guardians and steel forgers, worshipping goddesses who sound very similar to Lai's own. Determined to learn more about these women, these Keepers of the Dawn, Lai travels onward to find their temple. She is determined to make up for her past failure and will do whatever it takes to join their sacred order.

Falling in love with another initiate was not part of the plan.

Keeper of the Dawn is a tale of new beginnings, second chances, and the endurance of hope.
Book Review:
I have had Keeper of The Dawn on my TBR for years but I had never been in the mood for it. When I was looking for a shorter read, I finally thought it was the right time to read it. I was really disappointed though as the book did not live up to my expectations.

One of the major problems that I had with the book was the writing. I did convert the file to my kindle so I think that this might be why I had problems. The writing was minimal, so I did find that I was skimming a lot. The draw to the story was not there at all.

This in itself is the problem though as I found that I was getting distracted a lot throughout and the writing was not holding my attention. The writing itself was very descriptive and it did seem very list-like, almost simple. With some more editing, it could have been a lot better than it was in reality. This could have worked in the book's favour as it could have transformed the story into something less familiar.

I found that the writing did not build the world as much as I would have liked. It did seem quite generic and I have read a lot of fantasy stories with a similar premise. I also did not live where the story as a whole progressed.

I did not have a character that I connected to. Lai did have some moments but I did not care for her story a lot of the time. I also didn't connect with the romance in the story and I think this has to be a central part of the story.

Overall I found the story inconsistent. There were some bits and characters that I liked, but these were rare, and I wanted to love them more.
The Verdict:
Keeper Of The Dawn is an interesting story that is sometimes engaging but is a read that will easily be read.
Have you read Keeper Of The Dawn? Let me know in the comments below.