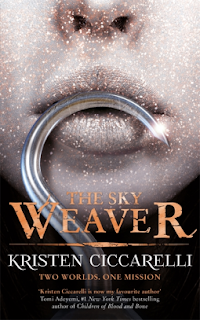 Book Summary:
Lavish, romantic and magical, The Sky Weaver is a new standalone story set in the world of The Last Namsara - one that fans of Leigh Bardugo, Holly Black and Laini Taylor will flock to. . .At the end of one world, they're always lying to another.Safire, a soldier, knows her role in this world is to serve the King of Firgaard-helping to maintain the peace in her oft-troubled nation.Eris, a deadly pirate, has no such conviction. Known as The Death Dancer for her ability to evade even the most determined of pursuers, she possesses a superhuman ability to move between worlds.When one can roam from dimension to dimension, can one ever be home? Can love and loyalty truly exist?Then Safire and Eris-sworn enemies find themselves on a common mission: to find Asha, the Last Namsara.From the port city of Darmoor to the fabled faraway Sky Isles, their search and their stories become threaded ever more tightly together as they discover the uncertain fate they're hurtling towards may just be a shared one. In this world, and the next.
Book Review:

I had been on the blog tours for the first two books and whilst the same didn't happen with The Sky Weaver, I was still really interested in finishing the series. It did take me a couple of years but it was well worth the wait for a fast-paced and engaging read.

I had picked up the story before and for reasons, I ended up putting it down in favour of other books. I think this was ultimately a good decision as I was really in the mood for it when I read the rest of it. This obviously paid off as it increased my enjoyment.

One of the elements that I loved was the pirate part as I was really in the mood for this type of story. Also, I did like the cast and crew that was introduced. It also gave the story a chance to grow the relationship between the two main characters and the sapphic elements which are vital later.

The two main characters of Safire and Eris are well developed and I loved seeing their relationship develop throughout the book. They both have their own interesting relationships and it was nice and intriguing to see this evolve throughout. This was also a great way to expand the existing universe and to increase world-building.

One of the best parts of the story was the end as it was great to see all the different aspects come together. I could not have predicted what happened and I actually really liked how it ended.

This is a credit to her writing as I did found it exciting and I just wanted to know what happened.

I don't really want to spoil anything but the ending was also quite surprising and I didn't think that what happened was going to happen. I was speeding through the last ten per cent which is a credit to her writing and the tension that was happening. I did appreciate it and seeing other fantasy books do the same will be a change.

I am actually quite sad that the story is over so I will definitely be picking up the next book that Kristen Ciccarelli releases!

The Sky Weaver is a great ending to the series that had me racing to find out what happened next.
Have you read any books in this series? If so, did you like it? Let me know in the comments below.