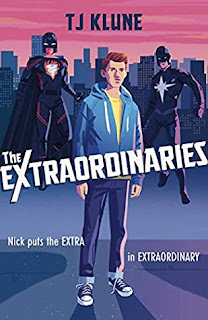 Book Summary:
In Nova City, there are extraordinary people, capable of feats that defy the imagination. Shadow Star protects the city and manipulates darkness, and Pyro Storm is determined to bring the city to its knees using his power over fire.

And then there's Nick who . . . well, being the most popular fanfiction writer in the Extraordinaries fandom is a superpower, right?

Instead of fighting crime, Nick contends with a new year at school, a father who doesn't trust him, and a best friend named Seth, who may or may not be the love of Nick's short, uneventful life.

It should be enough. But after a chance encounter with Shadow Star, Nova City's mightiest hero (and Nick's biggest crush), Nick sets out to make himself extraordinary. And he'll do it with or without Seth's reluctant help . . .

Rainbow Rowell's Fangirl meets Brandon Sanderson's Steelheart in TJ Klune's YA debut: a queer coming-of-age story about a fanboy with ADHD and the heroes he loves.
Book Review:
T J Klune has been one of those authors that everyone has been raving about over the last couple of years. Even though I wanted to read House Of The Cerulean Sea, there was something about The Extraordinaries that captured my attention. It was everything I wanted it to be, and I am sad that I read a great book at the start of the year.
I have to admit that when I first started to read it, there was a disconnect with the story, and I did not love it. I left it alone a bit and came back to the story again, and it was like something clicked. The writing style and T J Klune's voice is so distinct and funny that it draws you in. Once I was immersed in the story, I found it so hard to leave. This especially happened towards the end of the book, as I just had to know what happened.
One of the majors draws to the story has to be the audiobook. The narrator, Michael Lesley, does a great job of bringing the characters and the story to life. So scenes were so well-done that I was laughing out loud. This is also a credit to T J Klune's writing of course.
I am a major fan of superhero stories which was a big plus point for me, and I think justice is done to the genre. The story is really grounded. Even though it is set in Nova City, Nick is really relatable and is basically a massive ball of chaotic gay energy. I also think that it is at its heart a superhero story but still manages to keep the stakes quite low. No mythic alien came down in the final acts, and all the tension is built up previously.
I loved seeing the plot evolve and progress over the story, and I think it has to be one of the only superhero stories that wanted you to know the secrets before the characters. I managed to guess a couple of reveals quite early on, and I think this was there to reinforce Nick as a character.
The story also focuses on family and friendship, and all of these are so well-developed throughout. I loved the relationship between Nick and his Dad and how it evolved over the book through some events. The friendship was also great, and I especially loved Gibby and their involvement in the plotline.
It is also less common to get gay characters at the focus of the story, and The Extraordinaries does that which I loved. Nick also has ADHD, which was really great to see although I can't speak for the representation. Also, Nick goes on a journey throughout, and I loved how flawed he was. I think we can see the main protagonists perfect, but Nick develops so much over the course of the novel and makes so many mistakes that were great to read about.
Basically, I loved this book and the epilogue/ post-credits scene, left some answers open, and I can't wait to see what happens in Flash Fire!
The Verdict:
The Extraordinaries is a fun and entertaining superhero story featuring chaotic gay vibes with a lot of heart.
Have you read The Extraordinaries? Do you want to? Let me know in the comments!