May 26, 2020
* I am reviewing this book which I was gifted for free from the publisher in exchange for an honest review. All thoughts are my own. * 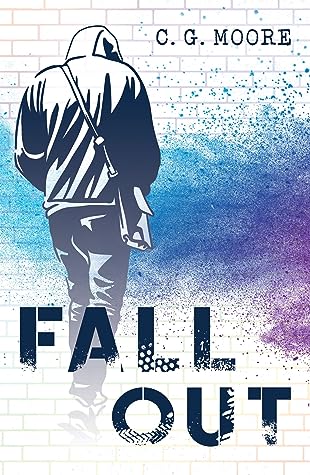 Book Summary:
I am Cal Adams – what does that mean?Sixteen years old.Black hair.Blue eyes.Short.Gay.For Cal, coming out is explosive, but that is nothing compared to the fallout from his family, friends and foes. When events in Cal's life reach critical, he is shaken to his core. Can he rely on his loved ones to help avoid meltdown?
Book Review:
I was really excited when I was asked to review Fall Out as I was really interested in the plot to see where it was going to go. I was therefore surprised when I saw how dark that it got but I think that it was made so important.
I was surprised at how dark the book was which I don't think that I was expecting. This was because Fall Out was not afraid to go there and tackles so much that LGBTQIA+ story doesn't often tell (that I have read). In the first couple of chapters, we are literally put into Cal's world and I think that the readers are allowed to go to that place. Even though it is dark. The opening chapter was also just so shocking to me and I think that the whole book was quite well-written and I was there for the ride.
By mentioning these difficult topics, there are trigger warnings for self-harm, homophobia and grief or loss of a loved one in this book. I think that especially homophobia is often overlooked in YA because readers may want an escape from the real world but this is something that still happens and that needs to be addressed. I think that this was addressed and the book still offers hope in the latter stages in a really emotional scene towards the end of the book.
I did really connect to the characters in the book. Cal had such a strong voice and I think that we feel empathy for him from the get-go and I wanted him to succeed throughout the book. He is complicated and he gets put through a lot but again the book offers hope at the end which I did like.
I also connected to the friendship in the book, especially Em. I think sometimes the side-characters are often not there to have their own stories but this was not the case and the writing allowed us to see who she was as a character and allowed her to grow as well. I also liked the friendship in the book and how they both managed to get through the book together, even though there were some tough situations.
This may be quite weird but I have read a few books later, where the main character seems to have a relationship with an older person and this book kind of kicked it off. Nevertheless, I did really like the relationship with Peggy and she really did not have a care in the world due to the condition that she is in. Her relationship with Cal was complicated and even though not wholly good, I think that it allowed him to learn about himself. This leads to some elements which I have mentioned in the trigger warnings above.
I have been one of those people who always mention that class is often an issue especially in UKYA and this was not evident in this book as Cal is working-class. It was interesting to see this play out in the book and even though it made his overall situation worse, working-class representation in books is important as many readers will be in the same situation.
Basically, I did enjoy this book and I can't wait to see what C. G. Moore writes next.
The Verdict:
Fall Out is an honest and brutal portrayal of sexuality and homophobia that is a must for all YA readers who read LGBTQIA+ book.
Have you read Fall Out? Do you want to? Let me know in the comments below!