April 07, 2020
So I am normally one to do a TBR but I thought it would be interesting to post what I am doing this month because I am doing a couple challenges which overlap with each other. (You can clearly see this from the title though!) So let's get started...

Reading The YA Book Prize Shortlist

Every year I look to see how many books I have read on the shortlist for the YA Book Prize and while I normally do OK this year I knew that I was slacking. Even worse I have 8 out of the ten books on my TBR so I obviously had an idea. Why not read them all! What is cool about the YA Book Prize is that they have twitter chats to go along with each book so hopefully, I can take part. Here are the nominees:

A Good Girl's Guide To Murder by Holly Jackson
Deeplight by Frances Hardinge
Furious Thing by Jenny Downham
Meat Market by Juno Dawson
The Deathless Girls by Karen Milwood Hargrave
The Gifted, The Talented and Me by William Sutcliffe
The Places I've Cried In Public by Holly Bourne
Crossfire by Malorie Blackman
The Black Flamingo by Dean Atta
The Quiet At The End Of The Universe by Lauren James 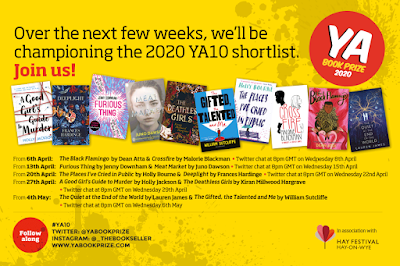 As I have already read The Black Flamingo and The Quiet At The End Of The Universe I will not be reading them again although I loved both of them.

I have also not read all of the Noughts & Crosses series so don't feel comfortable reading Crossfire because spoilers so instead will be reading Knife Edge, the second book in the series.

So I feel like a lot of people are doing the O.W.L.S. Readathon that is happening throughout April and I am now one of them! I felt like with me reading the YA Book Prize Shortlist, there was overlap so it seemed like the right time. I had also seen it over the last couple of years and always wanted to do it.

So what actually is it? I hear you ask!

Set up by Book Roast on Youtube, it was designed to replicate the exams at Hogwarts that take place in April. There are 12 prompts and although you can do as little or as many as you want these can also lead to career projection which is what I am doing.

I am taking the easy route which is a Journalist/Writer which means that I have to complete three prompts but I will do some more as well.

For this I need to complete the following prompts and the books that I will be reading for each one:

History Of Magic- Witch hunts: a book with witches/wizards

Muggles Studies- Book from a perspective of a muggle (contemporary)

Rebel With A Cupcake by Anna Mainwaring

Herbology- Mimbulus Mimbletonia - A Book Starting With A M

So those are the definite three but I can also do the following if I read the above books:

Arithmancy - Magical Qualities of The Number Two: Balances & Opposites: Read Something Outside Your Favourite Genre

The Good Girl's Guide To Murder by Holly Jackson

Charms - Lumos Maximus: Read A Book With A White Cover

The Places I've Cried In Public by Holly Bourne

Defence Against The Dark Arts - Grindylows: A Book Set At Sea/Coast

I might even read a book under 150 pages which will fit the Potions prompt by considering I have a lot of books already. I might need to calm down.

If that wasn't enough I would love to read A Wizard Of Earthsea by Ursula K. Le Guin as part of the LeGuinAlong hosted by AFrolicThroughFiction and I set myself the challenge of reading an audiobook at a month from my TBR Jar and this month it is Sweet Sorrow by David Nicolls.

So I know this is a lot. But some of them are short and I have audiobooks (which will probably save me) so hopefully, I will read as many as I can!

What are you reading in April? Are you taking part in any readathons this month? Let me know in the comments below!

See you soon and stay safe,