February 25, 2020
*I am reviewing these books which I was gifted for free by Abrams & Chronicle in exchange for an honest review. All thoughts are my own. * 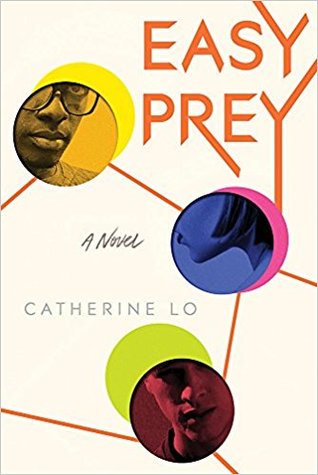 Only three students had access to a teacher’s racy photos before they went viral. There’s Mouse, a brainy overachiever so desperate to escape his father and go to MIT that he would do almost anything, legal or not. Then there’s Drew, the star athlete who can get any girl’s number—and private photos—with his charm but has a history of passing those photos around. And finally there’s Jenna, a good girl turned rebel after her own shocking photos made the rounds at school last year, who is still waiting for justice. All three deny leaking the photos, but someone has to take the fall. This edgy whodunit tackles hot-button issues of sexting and gossip and will have readers tearing through the pages to reach the final reveal.

I was excited to read Easy Prey at the beginning because thrillers are not my main genre so I wanted to give it ago. I really enjoyed the book and would like to read more from Catherine Lo in the future.I think that one of the things that I really did enjoy about the book was the characters. They all had their own individual characteristics and were all unique in their own way.Like a lot of thrillers in recent years, the book plays off the whole Breakfast Club stereotypes with one being a nerd, one being the popular girl who suffers with a problem and the popular guy. I think that these were done in a good way with them being well developed and having their own unique characteristics.Although I did like many ideas in the book, I did find the book hard to get into and was not as hooked as I would have liked to have been when reading a thriller. There was also a romance in the boon which I did not fully love and it felt quite forced and on one side made me really hate the character in some moments. These did effect my overall enjoyment of the book although I did like it.The problem with thrillers is that I do tend to guess the ending and with the characters having their own chapters it did make this easier for me not to guess who did it which is always a good thing.

Easy Prey is an entertaining and unputdownable thriller perfect for anyone who wants to get into the genre.

Have you read Easy Prey? If so, what did you think about it? Tell me in the comments!