April 19, 2017
* I have received this book for review from the publisher but this in no way affects my review * 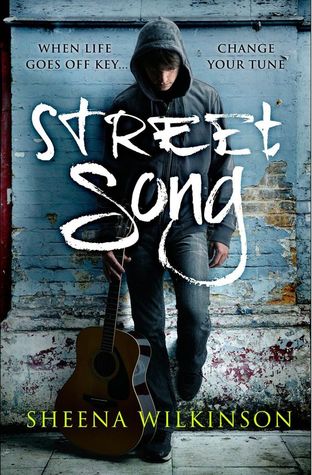 When life goes off-key, change your tune.
RyLee’s career is over. After winning a national TV talent show and becoming a teen pop sensation, his fame and success has quickly been followed by addiction, media scrutiny, and career suicide. After a brief spell in rehab, 18-year-old Ryan has some rethinking to do.
His stepdad – music promoter and self-appointed creator of ‘RyLee’ – wants him at home and in school, and under his thumb. But after an argument descends into violence, Ryan decides to run away from his old life, his failed career, and his dysfunctional family.
When he meets the stunningly witty but distinctly average guitar-player Toni almost directly outside his front door, the opportunity to start afresh seems too good to pass up. Before long, he has arrived in a new city, joined Toni’s amazingly talented band, and reinvented himself under the name ‘Cal’. For the first time in his life Ryan has friends around him, he’s playing the music he’s always wanted to play, and – despite living in a hostel, busking for his wages, and living under a false identity – he’s finally happy.
But just when Ryan feels like he has truly started over, his past begins to catch up with him.


Street Song is a book that follows Ryan who after winning a music competition gets a record deal, however, after a short run of success gets involved with drugs and has a stint in rehab and this follows his life after. In this, he finds Toni in a park, their friendship blossoms, leading his life changing tune...

One of the things that grabbed me at first was the setting as it is based around both Northern Ireland and the Republic of Ireland which is a place that I have not read a YA book before so it was nice to see this incorporated into a book. I also feel like the setting kind of did add to the story as when I do think of Ireland I think music which is a central part of this book.

The music was also something that I also really liked especially some of the excerpts from songs that both Ryan/Cal wrote and those from Polly Tree which is the band that Cal joined when he travelled to Ireland.

The busking element also was a something else I found interesting as well as how Cal made his life without limited money as this is not something that is typically found in YA. I also did like the fact that money problems and struggling with money were explored as this is something that many people struggle with in society. This was obviously quite contradictory as Ryan was rich due to his brief stint of fame opposed to Cal who was struggling for food. At points, I did find Cal/Ryan to be quite whiny over this as it just felt like he was worried about the money he did not have contrasted to the things he had a home although he knew the negative effects that going home would have.

Due to where we find Cal/Ryan at the beginning of the book, drugs and alcohol are explored in this book which does mean that these topics are discussed throughout the novel which was interesting to see as these are not typically explored in YA and I did feel like this was explored well.

The Verdict:
Street Song is one of my favourite reads of the year. It is raw and gripping and will make you want to write a song about how much you enjoyed this book.