August 17, 2016
So a couple of weekends ago I attended YALC- the Young Adult Literature Convention and it was a fun and great experience. This event is the only thing that makes me want to get up at 5.30 and 6.30am and actually be happy about it. The event is part of London Film and Comic Con and it is full of panels, signings, workshop and books. LOTS OF BOOKS. So in this post, I thought I would summarise my time there and the events that I went to. I am not going to do an in-depth summary of all the panels that I went to because let's face it this will be a long post. If you would like a summary of what happened then the panels were tweeted by @yalc_uk on twitter. So let's get started...

So Thursday was meant to be the first day of YALC but it was cancelled, in its place, there would be a full day on Friday. This meant that instead of leaving on Wednesday I left on Thursday. There was a pre-YALC meet-up today but due to my sister tagging along I did not attend.
I travelled from Colchester to stay with my Nan in London for a couple of days just because it would make travelling to and from the venue just a little bit easier. So after travelling down, we went into Central London because later in the day was the book launch of Chris Russell's Songs About A Girl. Once in London, we headed to Forbidden Planet which is a massive comic book store and when we headed into the store it was all a little bit dramatic as a man was being arrested for shoplifting and was not taking it lightly leaving a hulk shaped hole in the wall. As Forbidden Planet is near the Cursed Child theatre my sister toke a picture of it for me so here it is: 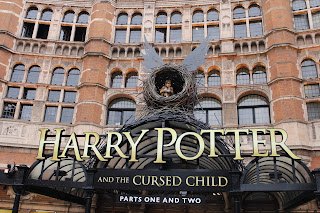 After we visited the Cursed Child theatre, we made our to Waterstones Piccadilly for the Chris Russell launch, where we were way too early for the actual event and wandered around the store for about 30 minutes. Events like this are always weird for me because I always seem to know what other bloggers look like but they don't know what I look like so there is the should I, shouldn't I debate as to whether to talk to them or not. It is fair to say I did the latter and did not speak to them as I happen to be quite awkward.
I have never been to a book launch before so I did not realise the extent of networking and general chit-chat that happened before the speeches. With this, I ended up chatting to a girl from Belguim who was also attending YALC over the weekend. The event was quite busy however so at some parts of the conversation it was hard to hear each other.
An hour or so later, the speeches started and there were speeches from the publisher and from Chris himself. Their speeches were quite good and it was nice to hear a little bit more about the book and how it was created. Then Chris and his band the Light Years performed a few songs from the fiction band, Fire&Lights and then a few of the bands own songs. They were really great and my sister got some great pictures at the launch.

So after this, we both headed back to my Nan's house and then I tried to sleep knowing that I had to wake up 5.30am in the morning because tomorrow was the 1st day of YALC...

So that was my Thursday and Friday at YALC.