August 29, 2017
So I am a massive fan of Harry Potter as some of you should know and I discovered that I have been tagged by the wonderful Sunkissed Scribbles to do this. So shall we get started...
What house are you in?

Hufflepuff of course!!! I don't really care what everyone says about Hufflepuffs but I am proud because we have Newt Scamander so...

What is your Patronus? 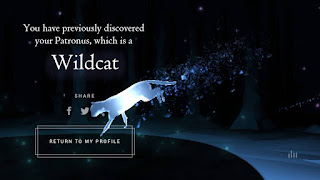 My Patronus is a Wildcat which is pretty cute and cool!

What is your wand?
Pottermore states that my wand is Spruce wood with a Phoenix feather core 11" and Slightly Springy flexibility. I am not really sure what this means but it sounds cool especially my Phoenix feather core so...
What would your boggart be?
I fear to fail so probably something in the manifestation of failing.
What position would you play in Quidditch?

I don't think I am equipped to play Quidditch but I would love to be Lee Jordan in terms of commentating the game.

Would you be a pure blood, half blood or muggle born?
The internet has a theory that you are a pure blood if you have read the books and seen all the films but I don't think this would be possible in the universe so maybe half blood.
What job would you want to have after graduating Hogwarts?
Maybe a teacher in Hogwarts? I don't see myself being an auror.
Which of the Deathly Hallows would you choose?
The Invisibility Cloak because who wouldn't want to have an invisibility cloak.
Favourite book?
Goblet of Fire or Prisoner of Azkaban because I really like them. I really love Prisoner of Azkaban because the Marauders and also I love the whole premise of it. I like Goblet of Fire because it is when everything gets real.
Least favourite book?
Probably Order of the Phoenix because it took me a month to read and I haven't reread it yet but this might change if I reread it.
Favourite film?
Probably Prisoner of Azkaban because it is one of my favourite books and makes a great film.
Least favourite film?
Chamber of Secrets because this is an OK book but the film is truly too long and for such a long film it still misses the Deathday party.
Favourite character?
I really love Neville because he is such a developed character, the way that he changes over the entire series is just wonderful.
Also, Luna Lovegood because she teaches people that you should just be yourself and embrace your quirkiness.
Least favourite/most hated character?
Umbridge because she is just a vile character.
Favourite teacher at Hogwarts?
McGonagall because of her sass and she is genuinely just an amazing character!
Least favourite teacher at Hogwarts?
Snape because he is just not a nice teacher and I get that he is complex, yes, but that does not mean you have the right to hate or be not that great to students.
Do you have any unpopular opinions about the series?
I don't really like Snape because anyone who scares a child so much that they are their boggart should not be respected.
If you could save one character from the final battle, who would you save?
Lupin or Tonks so Teddy would not be another orphan due to the events of the series.
OK, so that is the tag. What are your opinions on the Harry Potter series?
See you soon,
Amy